MONKEEMAN
It's Power-Pop with a dirty Twang !
"...this four piece have roots split between Belfast and Germany, and there’s an undoubted European flair to their pop/rock sound."
"...are a masterclass in hook laden guitar pop, full of catchy riffs and melodies.----MONKEEMAN mastermind Ralf Luebke was raised in the working class town of northern germany and tried to escape with his first band "The Colour Red". This was not without any success, the band was a regular visitor to German music TV in the mid nineties and released two albums collecting rave reviews around the country.
After a few breaks and changes during the last years, MONKEEMAN found a perfect line-up in Belfast/Ireland – an area where people know to deal with the authentic guitar tunes, melodies and working class beats."Being a long time follower of modernist fashion, my influences can be traced back to The Jam, Small Faces, The Kinks or Northern Soul, but punk bands from ’77 like The Undertones or Stiff Little Fingers belong to my youth as well," Monkeeman songwriter Ralf Luebke explains his music. The song is what it is about - no hip beats or electronic effects...Der Monkeeman himself (Git./Vocals) fand ausgerechnet in Irland 3 Typen für Bass, Drums, Guitar, die alle Marty heissen (kein Witz!) und aus dem rauhen Belfast kommen Die neuen Songs sind dem entsprechend direkter, melodischer, eine Spur dreckiger und authentischer. Power-Pop/ Mod-Rock der den Soul in der Garage aufmischt - und das mit Stil !
"For Fans of The Jam, The Beatles or Bob Mould" MONKEEMAN spielten Shows von Liverpool bis Belfast - Auf der größten Scooter Rally auf Mersea Island oder einem very special Event auf Enladung von Musiklegende Terri Hooley. Die KAISER CHIEFS sind Fans und man spielte vor einiger Zeit zusammen in Belfast. 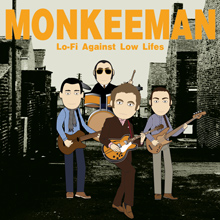 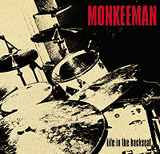 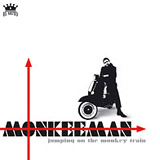 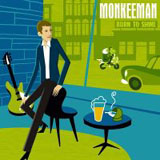 Reviews:
"The E.P.'s five tracks are a masterclass in hook laden guitar pop, full of catchy riffs and melodies. It starts off with a slight change in direction for the band, as the title track "Pressure" bursts out of the speakers with an angular Gang of Four style guitar motif, it drops out to a brief dub bass line before a thudding disco beat heralds the song's great chorus. It must rank up there with the best of Monkeeman's impressive back catalogue. "Pretty Fool" flows nicely and again uses a twisted guitar riff and powerful drumming - a kind of companion piece to "Pressure". "If The Music Was Over" slows the pace with it's moving plea of a chorus, it's a beautiful track. Although Monkeeman have in the past been labelled as a "Mod" band, I've always found their music to have more in common with the classic Power Pop bands such as Big Star and The Posies, with their chiming chords and timeless melodies. However, the band move easily between genres, for example "The Great Escape" crashes along at pace, reminiscent of The Replacements or The Long Ryders in their prime and I think Teenage Fanclub would have been proud to have penned the E.P.'s last track "Alright For Now". So it's a thoroughly satisfying record, the five tracks are bursting with great quality song-writing and the live feel of the recording gives it a raw and energetic sound that is totally infectious."
RETROMAN 65 Read full article :

"Long time Paul Weller supporter from Germany, and a great friend of us here at PWNews, Ralf Luebke aka Monkeeman is releasing a brand new EP on 27th of March and it's a nice little power pop gem. Ralf is a part of our Internationalist family. So, if you're unfamiliar with Monkeeman, we hope you'll check out the sounds. Definitely worthy of your ears and support!"
PAUL WELLER NEWS Read full article :

"There is no monkeying around with this stellar new EP from Monkeeman. For those of you with an affinity towards The Smiths and Sex Pistols, Monkeeman's EP 'Pressure' will appeal to the MOD in you."FILE UNDERBROUND MUSIC Read full article

"...More artisan than anarchist this four piece have roots split between Belfast and Germany, and there’s an undoubted European flair to their pop/rock sound. Rather than assail your senses with senseless intent Ralf Luebke uses his vocals and talent to present an engaging platform for you to consider."
"They’re preachers to a choir, soothsayers before seekers, able to entertain and engage without needless spin or spit. Perhaps it’s the Germanic side of Monkeeman that affords them that undefinable quality to their sound, a precise, engaging arousal of the attentive aural acceptors - Pretty Fool in particular is as infectious as anything you’re likely to find in the iTunes charts, the tale told not exactly one of wondrous recalling yet impossible to not get thoroughly caught up and chanting ‘Butterfly collector’ come the chorus..."
"With only the five tracks to the EP it won’t be long before you’re finger’s hovering over that repeat button on your mp3, but hover it most certainly will. So to save time and effort I’d advise simply hit ‘Repeat All’ before pressing play and disappearing into Monkeeman’s magic musical marvelousness of European flair and crowd capturing choruses... "
MAD SHELL PROMOTIONS Read full article

This dude has the songs, man! And we're going to say it now - Ralf Lubke is a Pop God! The man has the mojo, the feel, and the seemingly endless supply of hooks that make him an awesome God whose future efforts should be met with high anticipation!” (KoolKat Music USA 2007)

Reviews:
MONKEEMAN are a Northern Irish/German Power-pop act that has a truly international flavour to its new line-up. With a style and panache akin to The Jam, The Kinks, Bob Mould as well as The Beatles they have released three albums and an EP to date, all to critical acclaim in the German press. The first single “Universe” be came a massive radio hit on German Radio. With the EP “Pressure” the band are testing the waters with Ireland and the Uk.
Ralf Luebke, the brainchild behind the band, felt it was time to get Monkeeman back on track and so after a three year hiatus he set about the proce ss of recruiting a new line up for the band. In a
very audacious move, Ralf decided that he wanted to branch out into the UK & Ireland. By June 2012 he had found the new line-up in Belfast in the form of Marty Connolly (former Rainbow Corner on Bass); Marty Kerr (former Back Issues Guitarist) and Marty Malone (former drummer with psychedelic outfit, The Vals). After writing hundreds of eMails and hanging on the phone for
days, the guys finally hooked up on August 7th 2012 in Belfast City Centre (hometown of the 3 Marty’s) for a solid two week rehearsal schedule. During this period, the band gelled very well indeed, playing some of the bands old Monkeeman tun es but also working on new songs.
In November 2012 the Belfast boys travelled to Germany to record the new EP “pressure” in Berlin with Patrik Majer, one of Germany’s top producers.
The major accomplishment from this recording session in Freudenhaus studio was that all of the 5 tracks recorded were “live” takes, capturing the retro sound of the band and proving what an excelle nt live act the band truly is.