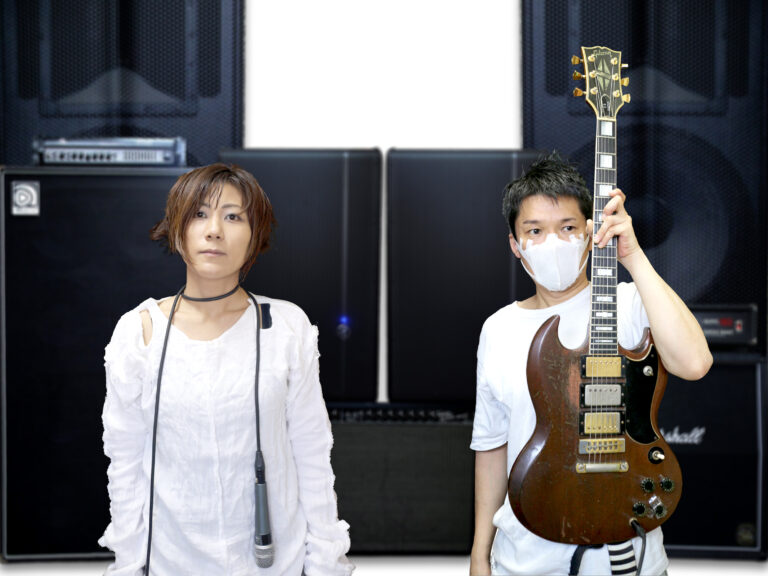 MELT-BANANA is a band based in Tokyo JAPAN, consisted by Yako who sings and Agata who is playing the guitar.
So far, they have been exploring music world, putting out 11 1/2 albums, many EP’s and more than 20 singles, taking a part in many compilations. MELT-BANANA’ s sound is pretty intense. And their music attracts people who are venturers of music and who desire to feel something from music and who just love music. So that, they also have many fans in musicians. Some people say that MELT-BANANA is a musician for musicians, but I don’ t think so. It is the fact that many of well-known musicians like MELT-BANANA, such as Lou Reed, Underworld, John Zorn, the TOOL, Mike Patton, the Melvins, the Wire, etc… But without such a distinction, anyone can enjoy MELT-BANANA if they have a passion to see the possibility of…*
*PLEASE DOWNLOAD & READ THE FULL PRESSINFO !

„You cannot just listen to Melt-Banana; you must experience Melt-Banana“ (John Peel)

Check out their latest album release „Fetch“.
“Album of the Week: Hear Melt-Banana Roar Back with the Spastic, Ecstatic, Pop-Grindin‘ ‚fetch‘
Melt-Banana, the original bubble-gnash architects of scrape-and-soar noise-punk have returned for a fresh 33-minute caffeine jolt. Their eighth album, fetch, arrives after a six-year silence — the record was side-lined in 2011 after the Tōhoku earthquake and subsequent meltdown at Fukushima Daiichi Nuclear Power Plant, a disaster that resulted in more than 15,000 lives lost.” SPIN Magazine

20 BEST METAL ALBUMS 2013
“Here is where you can hear people yelling, „OK, they’re really not metal“ but we can make room for Melt-Banana,  who used to tour with Dave Witte, one of the greatest metal drummers who’s ever lived, as a bandmember. On Fetch, the band is reduced to the duo of pedal-hopping guitarist Agata, singer Yasuko Onuki, the undisputed queen of chirp, and a drum machine that does things Man was not meant to do. Onuki is the tiny bird careening around the Tokyo electrical grid, squeaking with every feedback surge and digital blurt.”
ROLLING STONE
Full article: http://www.rollingstone.com/music/lists/20-best-metal-albums-of-2013-20131211/melt-banana-fetch-19691231

“Although Melt-Banana traded drums for a drum machine on their latest album fetch, it still came as a surprise to see the absence of a kit as the band set up for their performance. Once the lights went into hiding and darkness engulfed the room, vocalist Yasuko Onuki took the stage and gleefully raised a glowing MIDI controller above her head as if it were a portable gaming console and she had just unlocked a boast-worthy achievement.Where does she get those wonderful toys? But really, Onuki was reassuring us that Melt-Banana still has their percussive side covered while performing as a duo. Throughout their 45 minute set, Onuki shrieked while triggering hard-hitting drum blasts and bass lines as if the controller had an option for turbo mode. The effect was akin to a battle with Ichirou Agata’s pedal-abusing guitar experiments. While most guitarists in the realm of noise are content to loop over their sounds again and again, Agata’s looping style was more akin to a Möbius strip: an inescapable head trip.”

“Welcome Back, Melt-Banana We Love U”
“Metal people quickly embraced Melt-Banana in the ’90s cuz we populated the shows that they opened for Mr. Bungle. It was the latter’s tour for their weird second album (an album-length homage to John Zorn’s Naked City); the former kinda filed onto the stage, plugged in, and shocked everybody. It sounded like their songs had been disfigured by a blender, then tossed into a clothes dryer gone haywire. A grindcore album skipping away then hit by lightning. We loved guitarist Ichirou Agata, who wore a surgical mask while using a slide and whammy pedal together. It was heavy and wild.Their next album Charlie was 1998′s best, though since then Melt-Banana concerts and albums kinda belong to punk dudes and those bros who wish to be Japanese (even a 2007 tour with Tool lol). But like the sands of time, the paths of M-B and alt-metal (and post-metal) are converging again here in 2013. It makes sense: Each M-B album ventures further into noise and soundscape; in the wake of their home country’s huge earthquake and nuclear disaster, their sense of song has matched their daring and their energy. Meanwhile, metal is shoegazey as ever. So maybe u jam their very real new album fetch?” METALSUCKS
Full article: http://www.metalsucks.net/2013/09/24/listen-welcome-back-melt-banana-we-love-u/

50 best albums of the year 2013
Chart Position # 5 !
LOUDER THAN WAR
Full article: http://louderthanwar.com/louder-than-wars-albums-of-the-year-2013-50-1/ “It is the opening track though that sets the stall out. Candy Gun opens the album with the sound of waves lapping up on the shore, bizarrely reminiscent of altogether different records, like Brighton indie-rockers Clearlake’s whimsical 2001 track Jumble Sailing. But what follows is one of the best record opening tracks you’ll hear for some time. Its unrelenting drums (which continually stand out through the record, structuring every break and key change – not bad for a band without a drummer) drive us into that familiar Melt-Banana territory, where guitar line piles on top of guitar line to create what is an accessibly aggressive sound, filled with hidden pop hooks and rewards for anyone listening carefully enough.And that is what Fetch ultimately is – a reward for patience. They say good things come to those who wait and every second of Fetch’s half hour is packed with things to behold. Many people will live through sixty years without hearing a record even remotely as good as this, six years of waiting seems like a short sentence to be granted a masterpiece like this at the end of it.” LOUDER THAN WAR
Full review:  http://louderthanwar.com/melt-banana-fetch-album-review/

A band who have justifiably been championed across the world, Tokyo’s MELT-BANANA have been responsible for some of the most complex punk rock ever made…. that far outshines ninety-nine percent of most other bands out there. The band once described their live show as „Shooting machine gun and laser beam, chaos in order“. And I think that pretty much sums them up. – Olli Siebelt, BBC

MELT-BANANA are in a league of their own. There are other extreme hardcore bands out there who are experimental and unique but MELTBANANA are more than that. They are giants amongst infants. Masters amongst pupils. Kings amongst serfs. Nobody can do what they do and nobody can adequately use words to describe them. -Jeb, Crass Menagerie